Art in the Park visits Hoxton 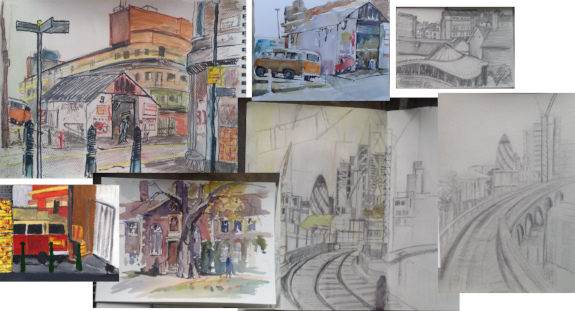 Seven Art in the Park enthusiasts arrived at the Hoxton Overground Station on Tuesday 25 October on a grey but dry day. The views of the railway tracks with Canary Wharf in the background appealed strongly to some of us, while an old VW Camper Van and an old garage with an automobile mural and lots of notices spoke to others. Also, as before, the elegancies of the Geffreye Museum facade close by drew one artist's attention.

We felt that we had a good morning when we collected in the Geffreye Museum's cafe for coffee and lunch and talked outdoor painting against the background hubbub.

Our next sketch-day will be to Fenchurch Street Station, details to follow shortly.

Posted by Heather James at 15:51 No comments:

Our next outing is to Hoxton on Tuesday 25 October

Our October Art in the Park outing is to Hoxton and the Geffrye Museum. We will meet at 11 am on Tuesday 25 October in the alley (Geffrye Street) at the back of the Geffrye Museum, next to Hoxton overground station. The plan is to draw the workshops in the railway arches or the view from the upper levels of the station. If cold or wet we have the opportunity of drawing inside the Geffrye museum, where there are lavatories and a café. There are also coffee shops and a bar/café/restaurant directly adjacent to the entrance to Hoxton Overground Station. This is Caffeine Central after all.

September's outing to the pergola at Inverforth House 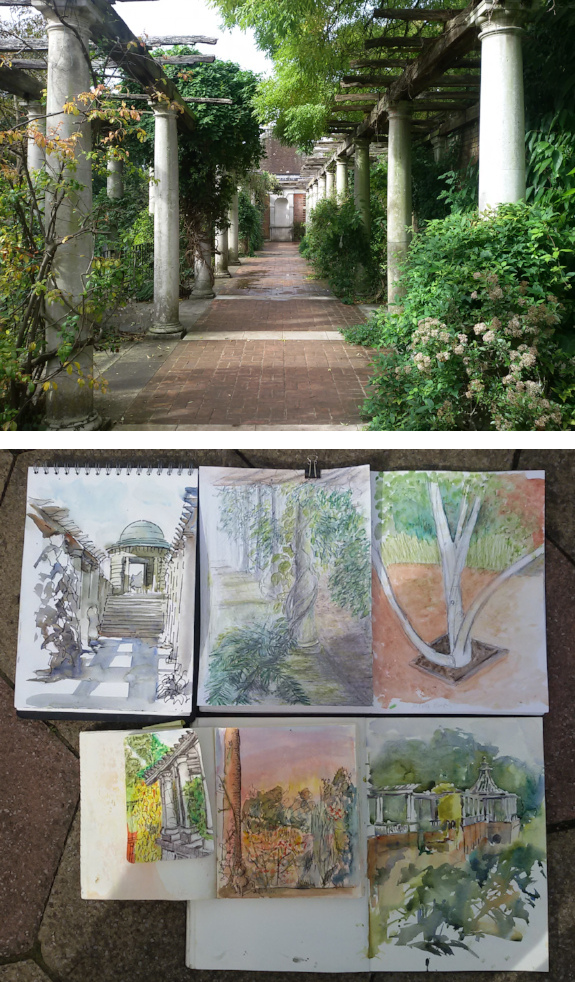 The September Art in the Park outing was to Inverforth House with its magnificent pergola. Inverforth House is on the edge of Golders Hill Park and tucked away behind trees. The garden is open to the public and it is one of London's lesser known gems, in an amazing setting with incredible planting. The pergola offered some challenging perspective, offset by the pre-autumnal vegetation.

The day started off by being rather wet, but five valiant artists either found cover or worked under umbrellas to produce some good work. We were rewarded eventually by brighter skies and lunch outside in the café in Golders Hill Park.

Art in the Park will be moving to settings with more cover as autumn sets in. Our next outing is to Hoxton and the Geffrye museum. There will be inside and outside options with possibilities for sketching the workshops under the railway arches. The date and details of the October outing will be posted on the blog shortly.
Posted by Heather James at 14:38 No comments: